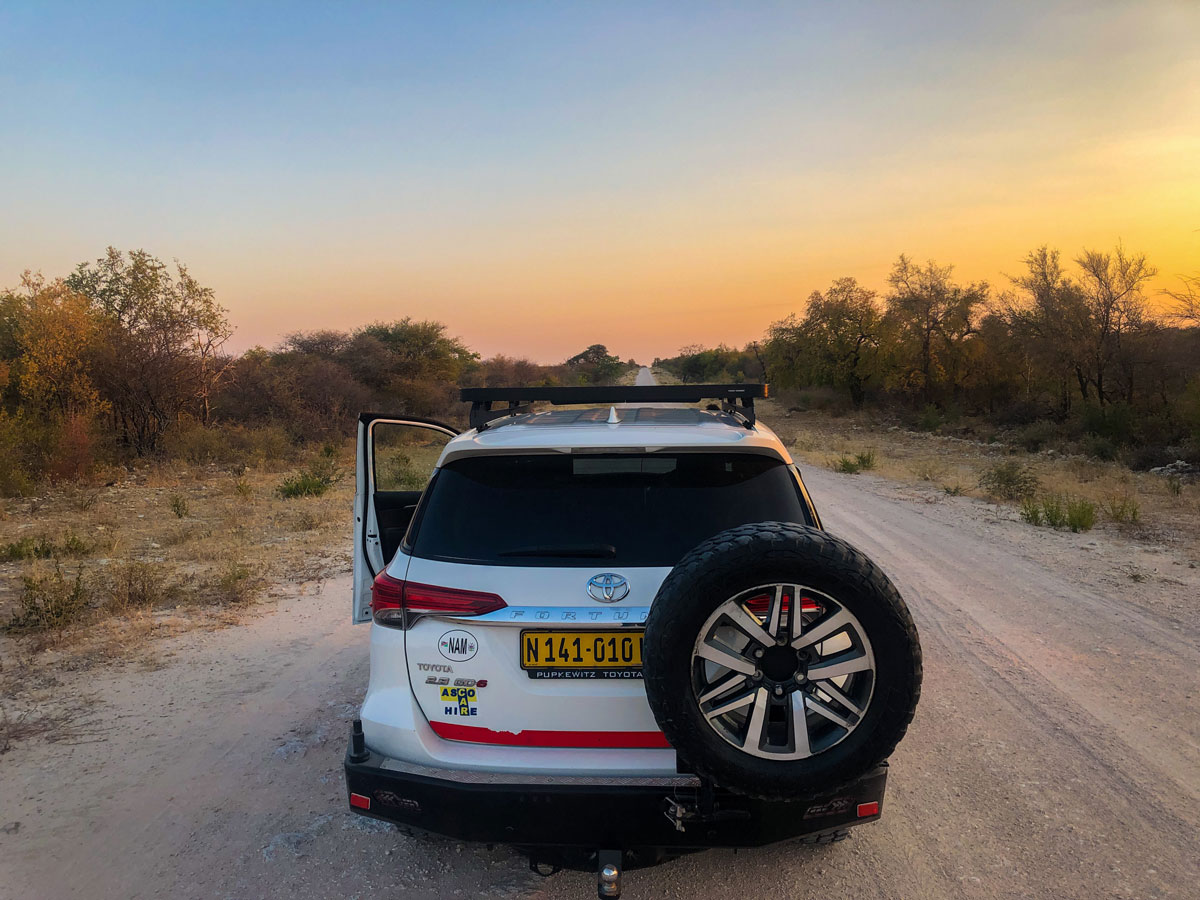 The Republic of Namibia is situated in the south-western part of the African continent. Positioned along the coast of the Atlantic Ocean, it’s bordered by the Republic of South Africa to the south, by both Angola and Zambia to the north, and Botswana to the east.

Namibia is one of the least populated countries in the world. On the planet’s official list of 195 countries, Namibia ranks 143rd in terms of population density — at about nine people per square mile of area. The country’s population stands at around 2.5 million people.

Namibia is the home of the world’s oldest desert — the Namib. The country is named after it. In the local Nama language, “namib” translates as "vast empty place."

This is certainly what Amaria and I experienced driving over 2,000 kilometres across some of the most awe-inspiring sweeping natural panoramas on Earth. We could drive hours without running into a single person.

Our road trip was relatively short, at just one week, but we still managed to pack in so much in this adventure of a lifetime.

Arriving in the capital, Windhoek

After a brief stop in Johannesburg, South Africa, we took an early morning flight to Namibia's capital city of Windhoek. Time was of the essence as we needed to grab our rental 4x4 vehicle and embark on the long 525 KM drive north to Etosha National Park, where we would spend our first night — ideally before sunset.

Thankfully, the car rental agency came to pick us up at the airport, and much of the paperwork had already been done before we arrived.

After a detailed briefing about road safety rules, tire pressure adjustments for the inevitable gravel road and possible sand driving, instructions on how to use our satellite phone and geolocation beacon in case of emergency, we were off onto the vast open roads.

We couldn't wait to get to our lodge at Etosha Park, rest up after a flight from Joburg and subsequent 6-hour+ drive, and hit the road again at the crack of dawn to photograph the National Park's wildlife.

Click on the photograph below to read my story.

After spending two nights at Etosha, the next destination was calling: the coastal city of Swakopmund. We had two main ways to get there. The longer route had us going back through the eastern gate of Etosha National Park (Von Lindequist Gate) and exit through the park's southern gate (Anderson's Gate) to drive through the dramatic sceneries of the Damaraland territory. The shorter route, favoured by Google Maps and our car's GPS, would take us back through the now more familiar main paved highway inland roads.

Even the shorter way was around 650 kilometres. Given our limited time, and desire to avoid nighttime driving, we chose the shorter route and marked Damaraland and the Skeleton Coast for the next trip — which will definitely happen.

After driving around 1,200 kilometres during just the first three days, we were quite happy to see the "Welcome to Swakopmund" sign. We had finally reached the Atlantic Coast!

Being in Swakopmund, Namibia's second city, feels like being in Germany. The colonial past is still very much present in the air. The Bavarian influence is very clear in the architecture. We could see German-only billboards and pamphlets everywhere in places we randomly visited around the picturesque coastal city.

But behind the beauty of Swakopmund hides a very dark past. The Germans ruled Namibia for just over 30 years. The first colonists arrived in 1892 and conflicts with the indigenous Herero and Nama people immediately began.

Germany officially declared the country as their colony in 1884, calling it German South West Africa. After years of disenfranchisement and marginalization in their own land, the Herero and Nama people began a great rebellion in 1904, which lasted until 1907.

During that time, it's estimated that between 65 to 80% of the local Herero population was decimated. It was the first genocide of the 20th century.

An item on our agenda we wanted to tick off while in Swakopmund was to find at least one shipwreck along the southern part of the Skeleton Coast. As one of the most treacherous coastlines in the world, due to the erratic crosscurrents, Namibia's Atlantic coast is littered with shipwrecks.

We found one doomed ship, the Zeila, at about 14 kilometres south of Henties Bay. The fishing trawler, sold to an Indian company, became stranded as the crew attempted to make its way to Bombay. This shipwreck is relatively recent, as the Zeila met its end in August of 2008.

Sandwich Harbour: Where the dunes meet the ocean

One of the must-sees on any trip to Namibia is Sandwich Harbour, located near Walvis Bay — located just south of Swakopmund. The Sandwich Harbour is a genuinely astonishing site where colossal dunes meet the ocean.

We hoped and prayed that the weather would allow us to witness this bucket-list-crushing expedition. The previous morning and day had been foggy, but thankfully, luck was on our side.

Click on the photograph below to read my story.

Where dunes meet the ocean
READ MY STORY

With our minds still blown from the seaside landscapes of Sandwich Harbour, there was no rest for the warriors. The next destination awaited early next morning, which was Sesriem (near Sossusvlei).

There's about a 350-kilometre distance between Swakopmund and Sesriem. But because virtually the entire way from Walvis Bay onwards is on gravel terrain, following the C14 road, the distance may seem deceivingly short. Don't be fooled. 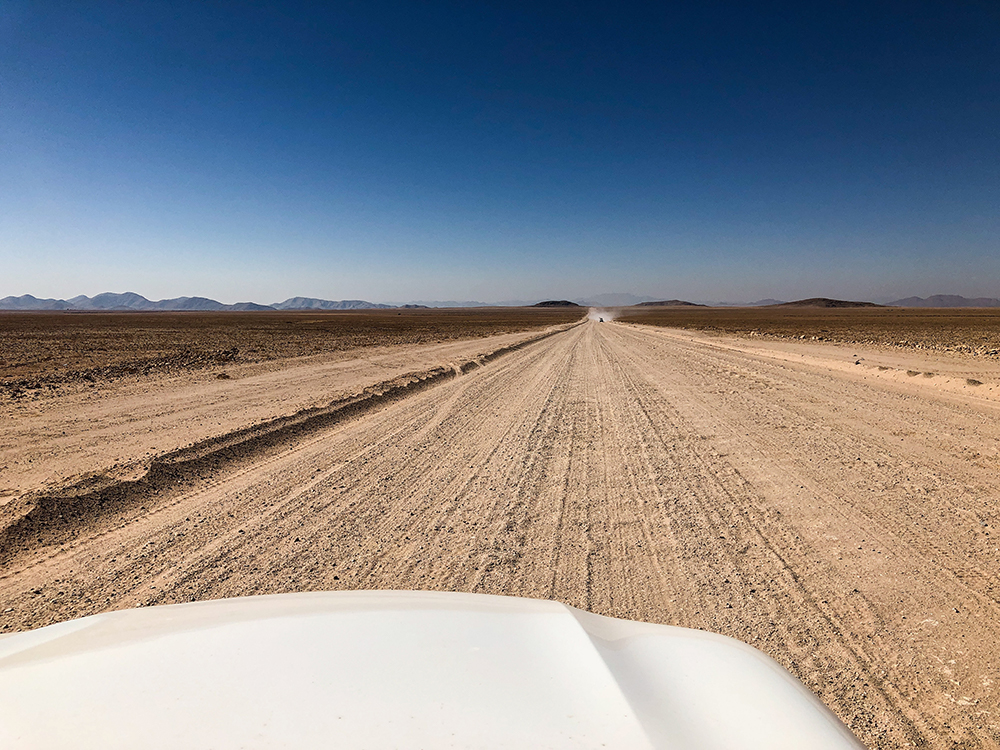 Driving through gravel roads significantly reduces the travel speed. It's important to respect the speed limit — officially 100 km/hr, but the car rental agency suggested 70-80 km/hr to reduce the chances of drifting and punctures.

There's a high level of road casualties in Namibia due to drivers being overconfident on gravel roads. The C14 also traverses some pretty steep mountain passes. Prudence is of the essence. Between Swakopmund, Henties Bay, Walvis Bay and Sesriem we saw countless memorials for people, many vacationing foreigners, who have perished on the roads. 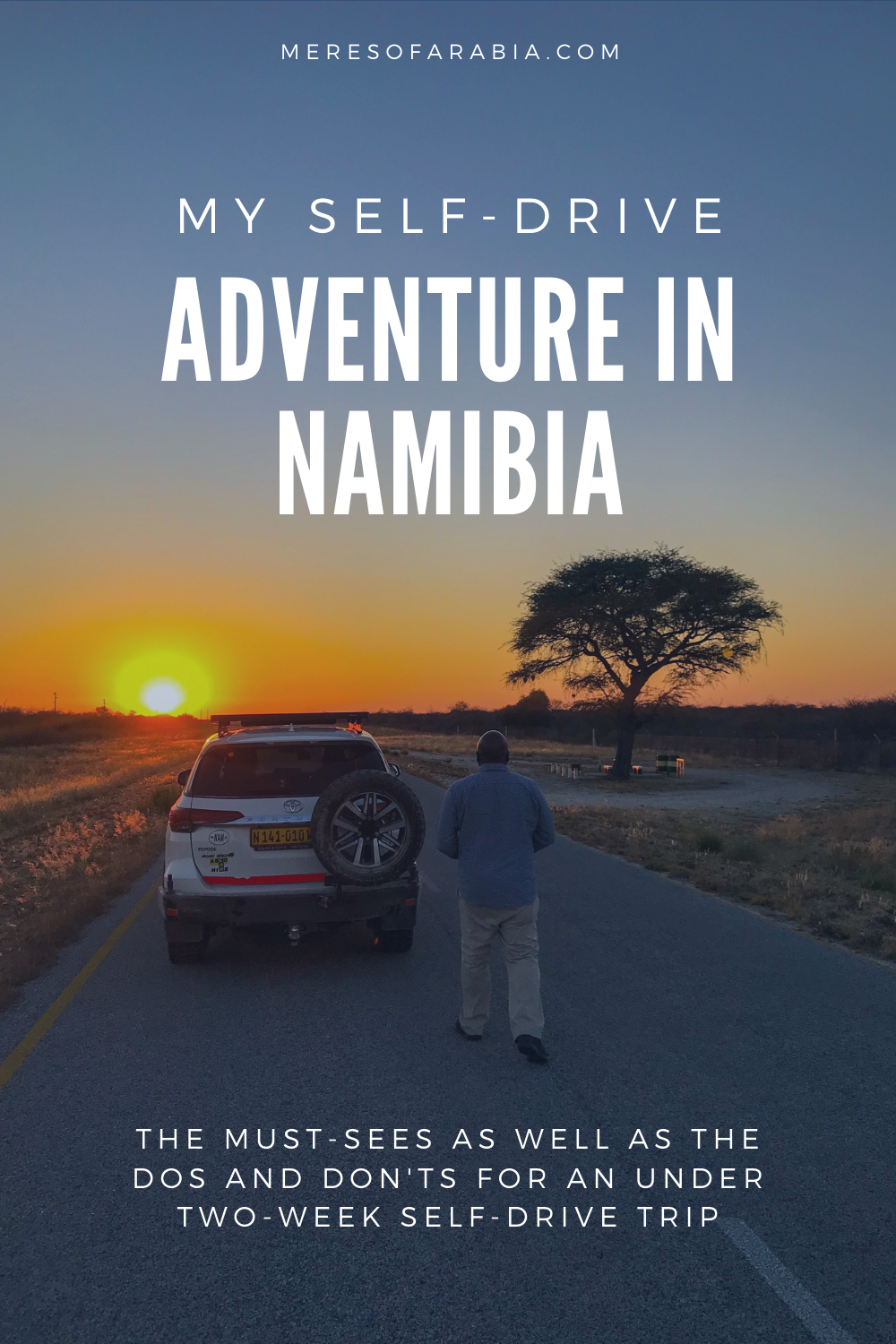 Being mindful of all this, as well as our usual compulsive desire to stop for landscape photos, it took us from early morning to dusk to arrive at our lodge in Sesriem.

But what an epic road this was.

The Tropic of Capricorn

One of the highlights along the C14 toward Sesriem was encountering the famous sticker-filled sign designating the approximate location of the Tropic of Capricorn. Yes, had to stop for the gram again. Actually, there are two signs on each side of the road.

The Tropic of Capricorn is one of the five major circles of latitude that mark maps of Earth. It runs parallel to the equator and is the southernmost latitude where the sun can shine from directly overhead.

It's a popular photo opportunity stop for global wanders who also very often place stickers on one of the signs.

About an hour away from the Tropic of Capricorn, still along the C14 road, we come across the enigmatic settlement of Solitaire. I had seen so many pictures from Solitaire before coming to Namibia and being there felt a bit surreal.

The area was given the name Solitaire by the wife of the original settler, Willem Christoffel van Coller, who purchased the farmland in 1948. She partly named it that because it's a lonely place. Initially built in 1848, Solitaire was planned to be used as a sheep farm.

For the past 60 years or so, Solitaire has been a popular spot for travellers looking to rest on the journey from Swakopmund or Windhoek on their way to Sesriem / Sossusvlei. There's a lodge there for those wishing to spend a night or more. Some even forgo Sesriem and use Solitaire as an accommodation base for their Sossusvlei adventures.

In addition to the lodge, Solitaire has a gas station, convenience store, and places to grab some food, drinks and baked goods. You can also try the legendary apple pie at Moose McGregor's. The original Scottish owner who ran the bakery for over 20 years, Percy “Moose” McGregor, passed away in 2014 and is buried near the shop.

Having enjoyed some refreshments and filled up the SUV at Solitaire, where the C14 and C19 highways meet, we turned right onto the C19 road for the final stretch of gravel road toward Sesriem.

We had once again won the sunset race and checked in to the Sossusvlei Lodge for a well needed night's sleep. The next race was going to be the sunrise race.

Read my story below to learn why Sossusvlei is all about the sunrise race.

The journey back to Windhoek

Before we knew it, the great adventure was coming to an end. After checking out at the first rays of light from Desert Quiver Camp in Sesriem, we began the drive back to Windhoek in order to return the rental vehicle and catch a 4:00 pm flight to Cape Town, South Africa. A lot to fit in. As you can tell, accomplishing all this in just seven days requires a lot of very tight planning and with little room for error. In hindsight, we were probably lucky.

But before leaving Namibia, there was one more mountain to conquer — literally. After driving back past Solitaire and on to the C14, we took a right turn towards road D1275 to climb the “Spreetshoogte Pass” towards Windhoek.

The Spreetshoogte mountain pass was hands down the scariest drive of my life, but also the most exhilarating.

Translated into English as Spreeth's Peak Pass, it stands at an elevation of 5,839 feet and with gradients between 1:4.5 and 1:6 it is the steepest pass in Namibia. It also straddles the biggest elevation difference. Trucks and caravans are forbidden to use it.

The mountain pass road is mostly gravel, but the worst parts have been paved with cobblestones. Did I mention there are no guardrails?

The mind-boggling views from the mountain top of the Namib vistas below were well worth my cold sweats and nerves of the way up.

It was the perfect way to end the trip. I will do it again.

in Travel
As part of my first trip to Brazil this summer, the city of Salvador de Bahia was high on my list . Known as the centre of Afro-Brazilian culture, I was eager to see for my self…