Pushing the limits of science on the track 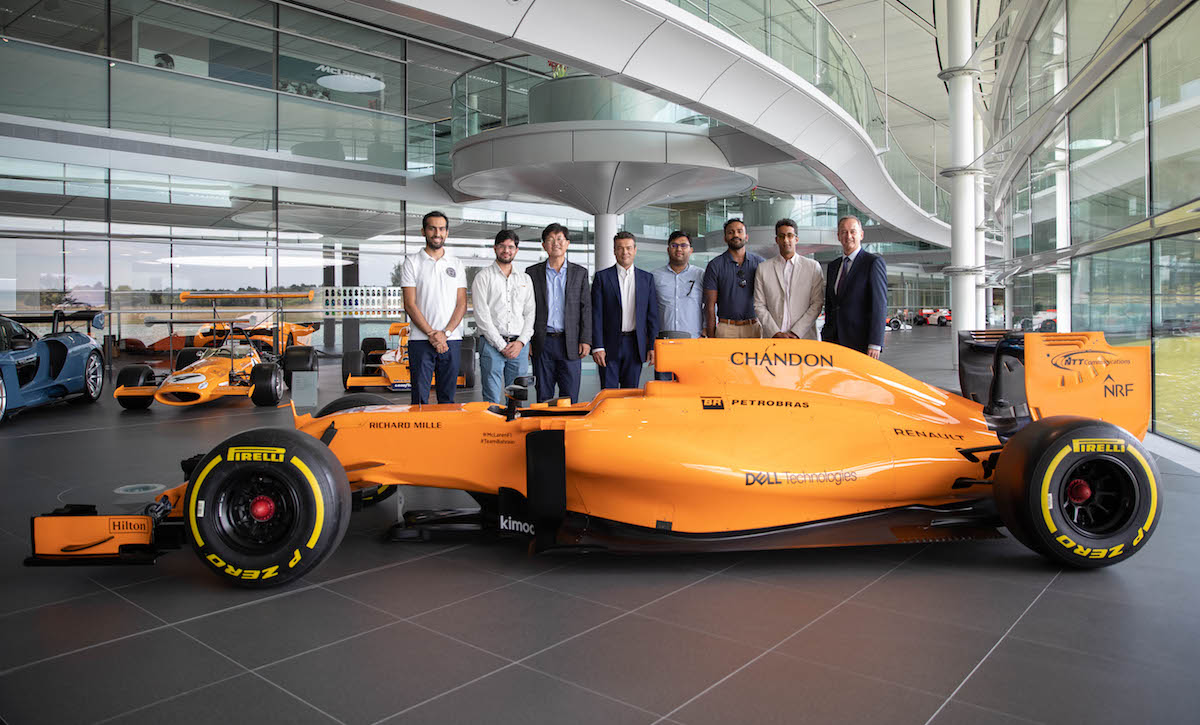 In the world of Formula 1 racing, the difference between the quickest driver or the fastest car and the team finishing last comes down to mere fractions of a second per lap. Over the course of an average race of 70 laps, this means a gap of one to two minutes. Those crucial few hundredths of a second that make all the difference are the result of many things: the aerodynamics of the vehicle; the weight of the car; race strategy; the driver; the tires; and the fuel composition.

All of these factors get optimized in real-time by Formula 1 teams using game theory strategies. Sensor-captured data is sent to the cloud, while teams run Monte Carlo simulations at their headquarters as the race happens. Decisions are made based on what sensors on the car are reading and driver and engineer feedback, as well as audio and video, feeds from the track.

A recently announced five-year research partnership between McLaren Racing and KAUST focuses on R&D and extreme performance technology. The partnership's main objective is to push science and engineering to new limits and improve the performance of the Formula 1 race cars.

An ideal center of excellence

When McLaren's racing director, chief engineer and chief business officer came to visit KAUST in December 2017, they were impressed with the University's state-of-the-art facilities and expertise in key areas like sensors and electronics, numerical simulations on supercomputers and fuel and engine combustion research.

"They knew this was the place," said Mani Sarathy, associate director of the University's Clean Combustion Research Center. 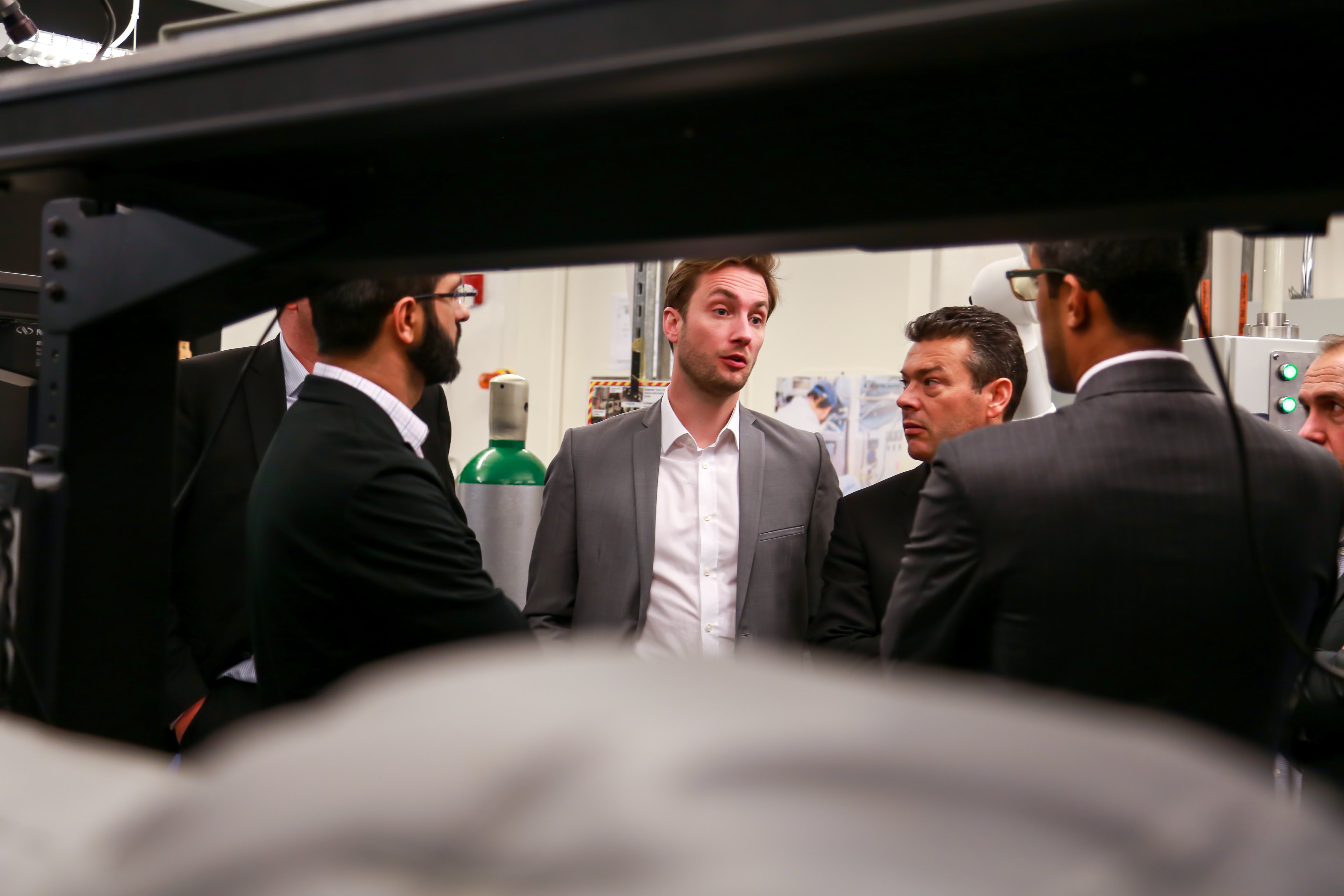 The core of the University's input into the partnership is focused on goal-oriented fundamental scientific research.

"To engineer technology for such an extreme environment—which a Formula 1 car is—we really need to do better science," Sarathy said. "Our scientists have to develop new experimental methods and new types of mathematical models. We need to train our students to understand more about very complex systems."

"The Formula 1 vehicle is a laboratory we don't have at KAUST. It's a real-world laboratory. It's a place where we can develop new types of fuels [and] new combustion concepts as well as new types of sensors and computer algorithms," he continued. 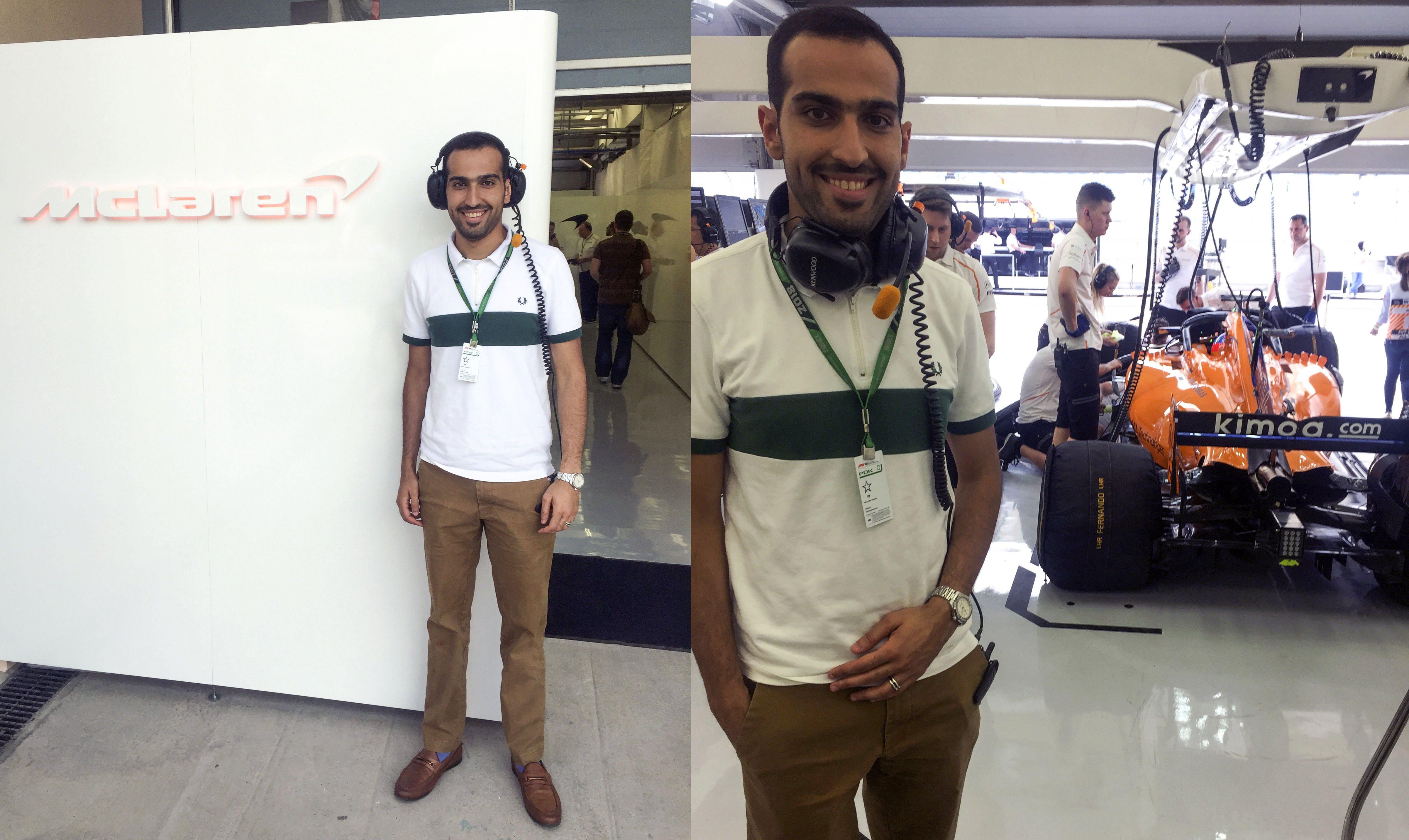 Abdullah AlRamadan, a KAUST mechanical engineering Ph.D. student and a Saudi Aramco employee, is pictured here. As part of the KAUST-McLaren agreement, KAUST scientists will have access to the McLaren Technology Center. KAUST students and postdoctoral fellows will also have access to the garage and pit lane during races—like the Bahrain Grand Prix—to do engineering. File photo.

The extreme real-world laboratory is all about performance.

The core of the KAUST-McLaren partnership is being reflected in a series of research projects to be selected by a joint Steering Committee that are aimed at pushing the development of KAUST scientists to ultimately help make the cars go faster.

"One of our goals is to demonstrate that fundamental advances in combustion science and fuel science can improve the performance of the Formula 1 vehicle," Sarathy summarized.

One of these rules, which has been reinstated since 2010, is that teams are only allowed a maximum of 105 kilograms of fuel in each race, with zero refuelling during the race allowed. Sometimes only 100 kilograms is used to get a lighter vehicle. There are also restrictions on the amount of fuel that can be injected into the combustion chamber per cycle as well as on the fuel composition.

Given these design parameters, how the fuel composition is tailored and the specific combustion characteristics are vital for the performance of the vehicle. 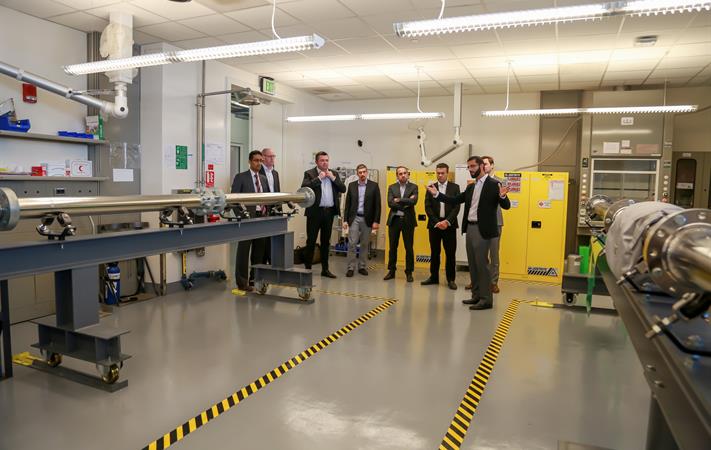 Another important element is aerodynamic performance. It's often stated that Formula 1 cars are more aerodynamically engineered than an aircraft. The aim is to reduce drag, have downforce and eliminate lift as much as possible. Aerodynamic optimization is achieved through two main methods: wind tunnel technology and numerical simulations—and specifically fluid mechanics.

Computational fluid dynamics (CFD) is a component of fluid mechanics relying on numerical analysis and big data that uses high-speed computers to analyze and optimize fluid flows under a given set of circumstances. Essentially, CFD simulates the flow over a car through mathematical modelling.

"F1 teams are in an arms race about who has the best CFD tools," Sarathy explained.

Similarly to fuel restrictions, Formula 1 teams must respect set regulations on the number of CPU hours they can use for design. Optimizing computational processes to increase results from the simulations for less compute hours is an immediate advantage to them. Completing more calculations and simulations using cutting-edge KAUST capabilities for the same amount of computing hours allows for better design.

There are about 300 sensors and lightweight electronic components on a Formula 1 car. Many of those require battery power, are tethered by cables and add weight to the vehicle. If teams can manage to skim off 2 to 3 kilos by having new types of lighter-weight sensors, this is a significant advantage. 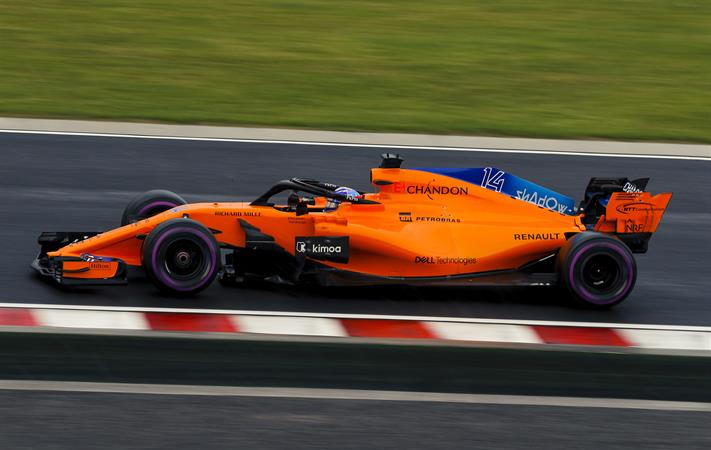 Formula 1 vehicles use fuel but run on a hybrid engine, which is why sensors and electronics are important. They also have an internal combustion engine as well as an energy recovery system powered by batteries and electric motors.

"Anything that can be done to reduce the weight of electronic components and sensors is very valuable. McLaren Racing was interested to learn about what KAUST does in terms of flexible sensors, lightweight electronics and wireless technologies," Sarathy noted.

Another area of investigation is computer vision. Bernard Ghanem, KAUST associate professor of electrical engineering from the University's Visual Computing Center, focuses his research efforts in the fields of computer vision, machine learning and image processing. Ghanem has worked on scanning sporting videos and getting computers to recognize what athletes are doing. Similarly, Formula 1 racing offers a wealth of live video feeds, audio and sensor data from the vehicle—which can be more effectively analyzed through machine learning.

However, as Willam Roberts, KAUST CCRC director, asked, "Can we choose a fuel and guide the engine development, as opposed to the fuel being reactive?"

The currently ongoing 10-year FUELCOM program that KAUST is conducting in partnership with Saudi Aramco aims to answer those questions. It has set an excellent path for the new partnership with McLaren Racing. 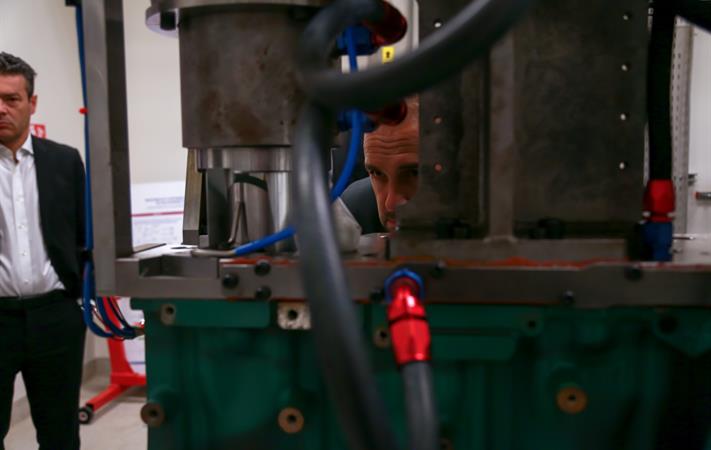 The FULECOM program KAUST has with Saudi Aramco was a clear indication to McLaren Racing that the University's researchers are able to do fuel design for advanced combustion engines. Photo by Raheena Abdurehim.

The goal of FUELCOM, as Sarathy outlined, is "to show that fuel and engine co-optimization—or co-design—can provide better fuel efficiency and better engine performance in light-duty passenger cars and heavy-duty trucks. It's the same thing here for Formula 1 vehicles. We're going to show that developing fuels for the extreme F1 engine application can improve engine performance. Conducting this research will improve our understanding of fuel/engine interactions and pave the way for fuel design in future high-efficiency road vehicles."

The agreement between McLaren and KAUST stipulates the joint intellectual property (IP) sharing of innovations generated from the collaboration. For instance, the development of new sensor technology or computer algorithm may be spun-off into the commercial automotive sector.

"We at KAUST want to see our world-class research put to use in the economy and in society. The partnership with McLaren will help us to develop the science into real-world applications which will likely cascade from the exciting extremes of F1 to become part of the road-going cars of the future," said Kevin Cullen, vice president of KAUST Innovation and Economic Development (I&ED).

Technological innovations from the Formula 1 race track already have a long history of making their way into our everyday cars. Disc brakes, seat belts, gear shifts and dynamic suspension are a few examples of this. KAUST I&ED and its counterpart at McLaren, McLaren Applied Technologies, will be actively working on identifying and pursuing IP development opportunities.

"Much engineering-related technology transfer rolls out from leading-edge solution-development to become mass applications, and we are delighted to have McLaren as a partner in making that happen in the automotive sector," Cullen said.

Finally, there's the important element disseminating the fruits of the collaboration and engaging with the wider community. Different types of science and engineering initiatives like a forum during the Formula 1 race in Bahrain are being planned. People from the region and beyond will be invited, and they will have the chance to learn about KAUST and take part in discussions about science and engineering. A driver from the McLaren F1 team is also scheduled to come to KAUST as part of the University's Winter Enrichment Program (WEP) in January 2019—where the program's theme will appropriately be "Time."

Over the course of the five-year partnership, a Steering Committee represented by three individuals from each organization will be responsible for examining and deciding on collaborative projects over the course of the agreement. The KAUST Steering Committee members are: Sarathy; Dr. Teofilo (Jun) Abrajano, the University's Office of Sponsored Research director; and Cullen.

"The work of the Steering Committee is the easiest part of this undertaking. The pioneering work of Mani Sarathy and his colleagues at the CCRC, the Extreme Computing Research Center and the Sensor Initiative and the state-of-the-art research infrastructure of the University all converged to create this opportunity to meet the performance challenge posed by McLaren and Formula 1 racing. KAUST has shown yet again our distinctive approach in the pursuit of excellence and impact," Abrajano said.